No Slums and a ‘Vision City’: An Impression of Kigali’s Housing

In this blog, Professor Ya Ping Wang, Director of the Centre for Sustainable, Healthy, and Learning Cities and Neighbourhoods (SHLC), reflects on housing in Kigali’s different neighbourhoods. This piece was originally posted on the SHLC website.

At the beginning of this year I joined my colleagues from the University of Rwanda, and our other international partners, in Kigali for a week-long project meeting and fieldwork. As a specialist in urban studies and housing in Asia, I was keen to explore the differences, and sometimes surprising similarities, between neighbourhoods in Africa and the communities of Asia’s rapidly urbanising cities.

Kigali, Rwanda’s capital city, has experienced sustained population growth and physical expansion after the devastating 1994 genocide perpetrated against the Tutsi. From less than half a million people, the city’s total population has expanded rapidly to reach 1.13 million, more than doubling in size in just over 20 years.

During a meeting at the Mayor’s office, Kigali’s urban planners told us that (as was plain to see) the city is urbanising rapidly and proactively planning for rapid growth. To accommodate the fast-growing population and economic activities, the city’s administrative territory has doubled from 314 km2 in 2000 to 730 km2 by 2005. It was very clear to me why Rwanda (and Kigali)’s fast economic growth and rapid urban transformation has led the country to be dubbed the ‘Singapore of Africa’.

Informal housing occupies a large proportion of land area in the city; but, as City Officials and our academic colleagues proudly attested, Kigali’s informal settlements are different from slums found in other developing countries.  As you can see in the pictures (1 and 2) from our neighbourhood visits, this unplanned settlement has traditional, high density housing, which is generally of poor quality and with limited modern infrastructure. Most roads and streets are not paved. Some areas show signs of mixed construction, with better and good quality structures among the poorer houses. 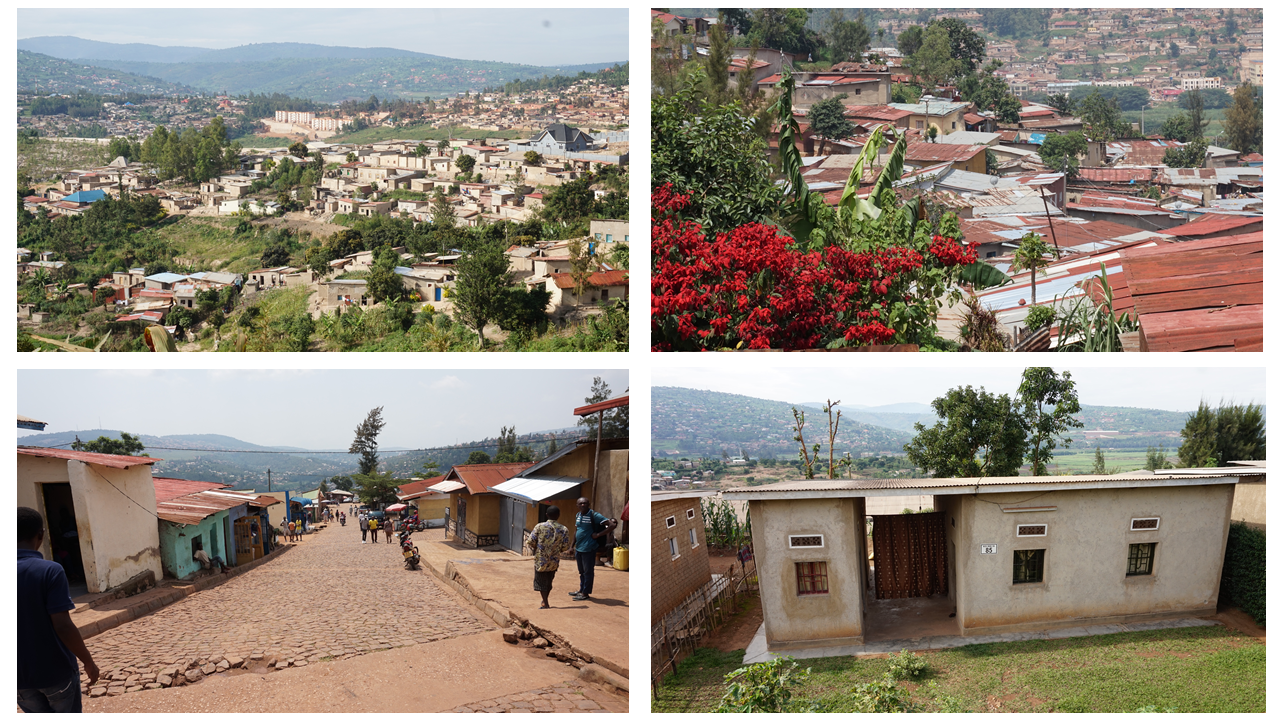 (Picture 1 to 4, from left to right). Traditional, Unplanned and Informal Housing. Kigali, Rwanda. Credit: Ya Ping Wang, University of Glasgow

Local residents told us that land ownership in unplanned areas is private. Landlords could own several houses together, which they inherited through the traditional rural land and housing system. Landlords may live in one house and rent their other properties so rent becomes their main income. These are also the places where new migrants come and live. In recent years, the government has exercised very strong and strict controls on new buildings in these unplanned areas. No new building or additions are allowed. This policy may have prevented these areas from further declining into slums.

To improve living conditions, Kigali has focused on upgrading, rather than relocating, informal settlements.  In Agatare, for example (Picture 3), a World Bank supported informal settlement upgrading scheme, we saw construction and development focused on improving main roads and drainage as well as upgrading the electricity and water supply.

Upgrading, however, has also resulted in some families being relocated (Picture 4 shows an early relocation scheme). During relocation families are offered two choices: a) cash compensation, or b) moving to a new area, for example, Batsinda (Picture 4). The new ‘replacement’ houses all follow the same design, each costing about 4 million Rwanda Francs (about £5,000). It was clear these were good quality houses, but they simply remain too expensive for most of the families facing relocation. Instead, we were told, many took cash and moved to other places or some people did move here but then sold their houses to others. Although the area is still low income, many current residents are actually newcomers who are better off than the families originally targeted.

We had the opportunity to explore many different types of new neighbourhoods across the city and it was clear to see that the expansion of ‘planned’ housing is occurring in many different forms. Most new neighbourhoods in the city fell into this category of privately built areas. Kigali is a hilly city, the ‘land of a thousand hills’, making it a very hilly city, and many of the newly planned areas spread upward on the gentle slopes toward the top of these hills. 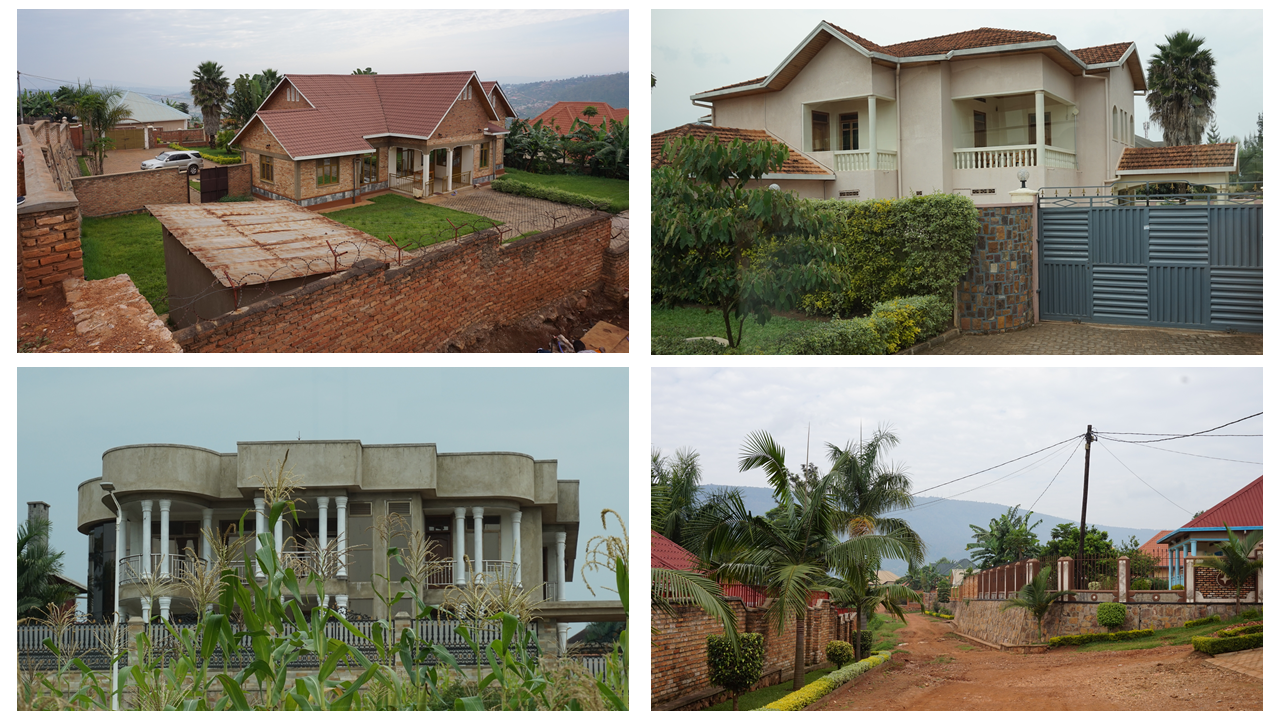 (Picture 5 to 8 from left to right). Planned and Privately Built Housing, Kigali, Rwanda. Credit: Ya Ping Wang, University of Glasgow

Walking through these neighbourhoods we can see that the ‘plan’ divided the fresh land (originally banana plantations) into plots of more or less equal size between 400 to 700 m2. Plots bought earlier are larger and recent ones smaller, due to land price increases, which have seen initial costs of around 1000 US $ per plot at Kabuye a few years ago, grow to $6000-7000. The planned plots are accompanied by some very simple road and street drainage frameworks before being sold off. Once a plot is bought, families start organising construction of the house. The design must be approved by government officials and normally involves a professional engineer. The construction can take many different forms. Some families organise the building process directly, while others employ a builder. This arrangement resulted in very different styles and sizes of houses, some are huge and very luxurious, while others are more moderate and less fancy, but all shared the relatively poor road, power, and sewage infrastructure. (Picture 5-8).

At the top of the housing ladder there are very modern and commercially developed housing estates at various slopes away from city centre, and multi-story flat blocks near the city centre. The best, and most talked about, example is the gated community called ‘Vision City’ which very much stands out in the cityscape and is clear to see from many viewpoints across the city. Developed by a Chinese company, the estate includes detached and semi-detached villas as well as luxury apartments with modern amenities. These commercially developed estates have a high social and economic status and units are more expensive in sale price; houses are beyond the affordability of most local ordinary residents. Foreigners, business people and senior government officials are the main residents. 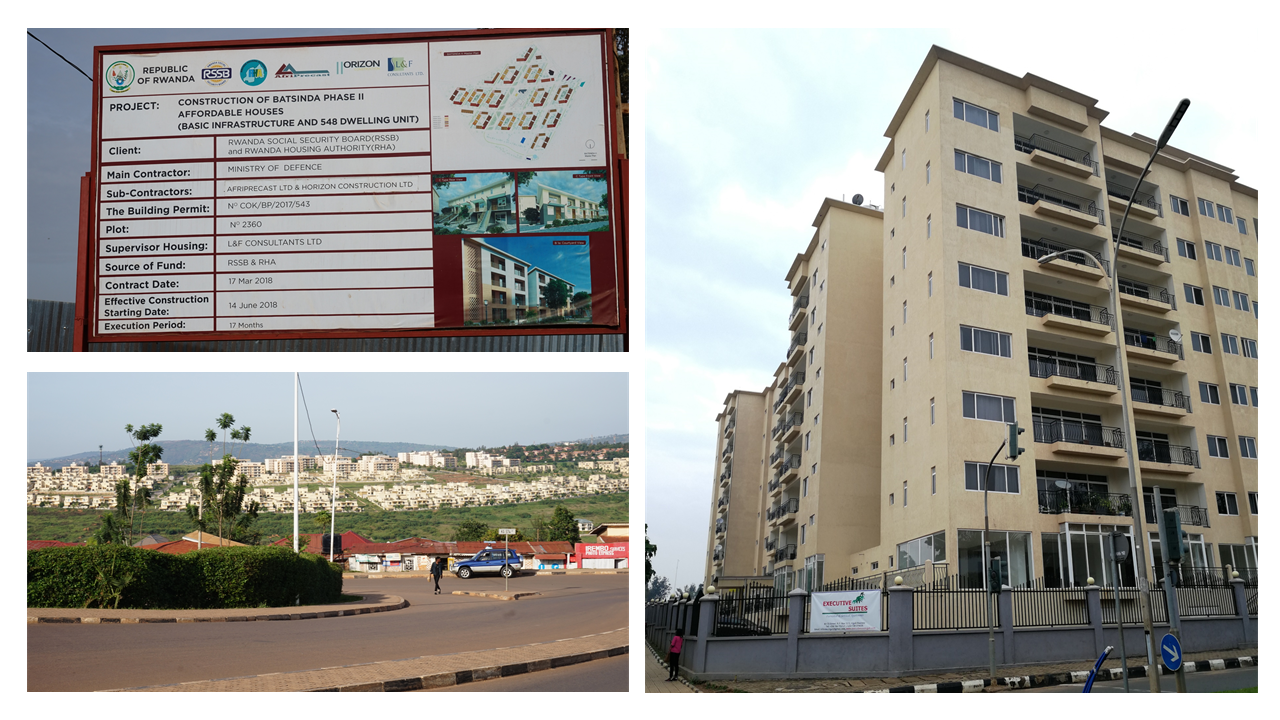 There are also new social housing areas under construction in the city, like ‘Phase II Batsinda’ (Picture 9, top left). But considering over 80% of residents live in unplanned or privately built houses, it is questionable who is going to live here in the new social housing, especially when plans follow the ‘Vision City’ development model.

Kigali has moved a long way since the 1994 genocide, there has been huge amount progress for which the country should be celebrated, and housing conditions have improved substantially for parts of the population. Rapid urbanisation and housing development show some distinctive features that I have not seen in other cities. For large parts of the city, urbanisation essentially means to bringing traditional rural communities together by building houses close to each other and replacing rural income with urban employment and business opportunities. In this way urbanisation has enabled people to maintain some of their traditional way of life in cities. Vision City, however, creates a very different type of urbanisation, still small in scale, but similar to urbanisation we are familiar with in East Asia, which is, unfortunately, extending the already wide gap between the rich and the poor.