Homelessness prevention in the UK – Emerging impact of CaCHE analysis A growing focus on prevention

The ‘prevention turn’ in homelessness policy, that can be seen across much of the developed world in recent years, has taken different forms and has commenced at different points, in each of the four UK countries.

A framework for comparison

This diversity in approach across the UK countries provides excellent “natural experiment” conditions to investigate the relative effectiveness of different kinds of approaches to homelessness prevention. However, if it is to be systematic, this kind of comparative analysis requires a robust conceptual framework. So we started our work by trawling the international research literature for existing prevention ‘typologies’. We found that the most commonly used was a tripartite ‘primary/ secondary/ tertiary’ categorization inspired by public health approaches[i], and analogous with the ‘upstream/ midstream / downstream’ model used across wider public policy. More recently a Canadian-inspired typology has gained traction in Wales.

However, a five-part typology that emerged from policy deliberations around the latest Rough Sleeping Strategy for England, rather than the international academic literature, was to our mind the most compelling and practically useful[ii]. By offering more discrete categories of prevention, the framework captured in the diagram below allows for finer-grained assessment than the other models we identified. 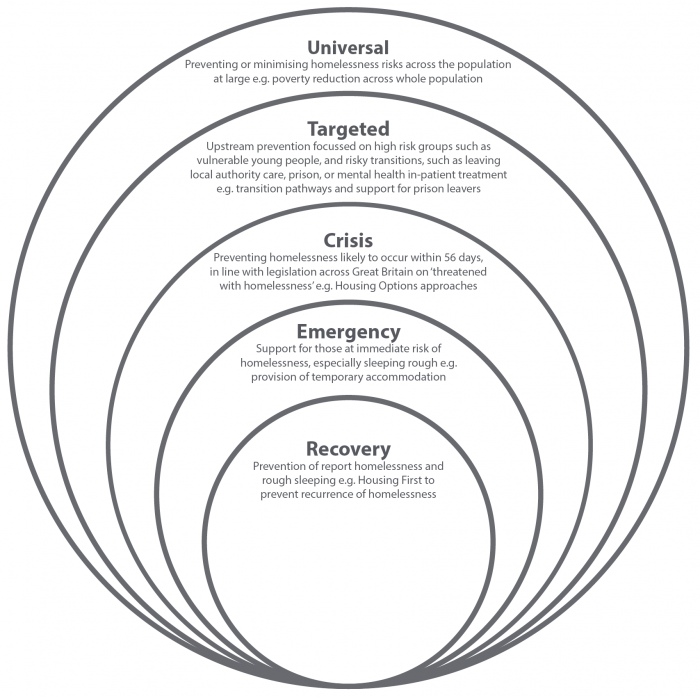 Applying it in our empirical analysis enabled us to clarify that most progress has been made on Crisis forms of prevention across the UK, especially under the new Welsh and English legislation, but much work remains to be done on Universal and Targeted forms of prevention in all four UK jurisdictions. Likewise, significant improvements are needed to the Emergency and Recovery support available to single homeless people and to those sleeping rough in almost all parts of the country.

Reactions to the typology

Over the course of 2019, we have had the opportunity to present this typology and our associated research findings to a range of policy and academic audiences, including testing it out pre-publication at the annual Housing Studies Association conference in April, held in Sheffield, and at a CaCHE Stakeholder event in Belfast in June. We sense that this framework has great practical resonance, which was borne out by the positive reactions of these early audiences. Since then we have also used it as the basis of well-received presentations to the Welsh Government Homelessness Action Group, Centre for Homelessness Impact’s annual events in Wales and Scotland, a Welsh Housing Cabinet Members event on homelessness, a Public Health Wales event, and Shelter Cymru’s annual conference. Significantly, the framework was also presented at a seminar in Australia – hosted by Unison, RMIT and the Council to Homeless Persons.

Moreover, we were delighted to find that the typology has been now been adopted by Homeless Network Scotland to frame their work on ‘Prioritising Prevention’, including at their 2019 annual conference in October 2019 which was delivered in partnership with the Scottish Federation of Housing Associations. The typology has also been deployed by Crisis, the national charity for homeless people, to structure their prevention-related activities, including their convening of the new Homelessness Prevention Duties Review Group in Scotland that is tasked with making recommendations to the Scottish Government about required legal changes.

For understandable reasons, the thoughts of many people turn to helping homeless people at this time of year. But too often the focus is limited to rather basic forms of Emergency assistance. We would argue that concerted action is needed across all five forms of homelessness prevention highlighted in this typology if we are to come anywhere near ‘ending’ homelessness in the UK.

[ii] While this typology was presented in a working document used by MHCLG to help inform the development of the Government’s Rough Sleeping Strategy, it should not be seen as necessarily representing government policy.